Tower Trail, in the Thornhill area of Maple Ridge, is one of several horse trails of historical significance to the Maple Ridge community. In February 2019, Tower Trail was awarded Heritage Status in the category of Heritage Landscape/Natural Heritage Resource by the Maple Ridge Community Heritage Commission.

Tower Trail was created in the late 1970s by volunteers from the Ridge Riders (aka “Haney Horsemen Association” after 1980), and is one of several trails that the HHA registered with the District beginning in 1982. 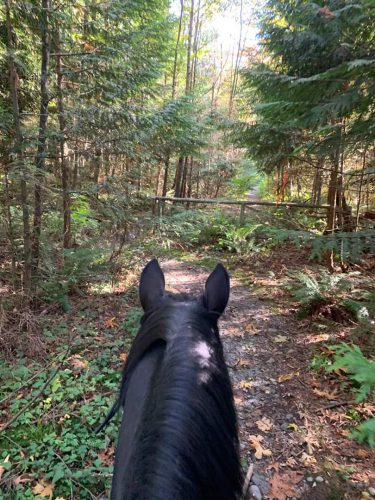 For over 40 years, Tower Trail has been a primary connector in the Maple Ridge horse trail network; the trail route gradually climbs the north slope of the forested urban reserve on Thornhill Mountain between 252 Street and 260 Street, providing equestrians and hikers with off-road access up and over the mountain’s peak to connect with the southern Thornhill trails. 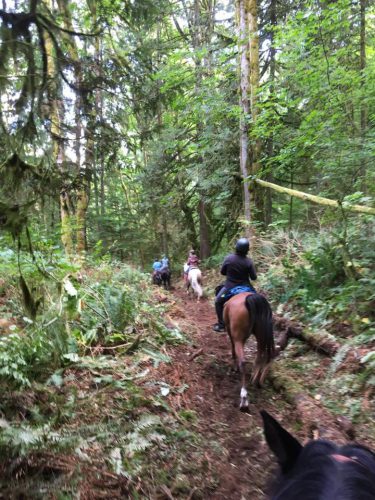 Tower Trail was aptly named because of the easily-visible landmarks of the BC Tel Towers at the top of the hill (256 Street) and the Cable TV towers, and later, the radio repeater towers. Towers are located at the peak and approximately 200 m down the southern slope.

Tower Trail has been maintained over the decades by HHA volunteers. Among the HHA members whose volunteerism was critical to the development of the Thornhill sections of the Maple Ridge horse trail network is Dave Smith. As his Tennessee Walking Horse breeding and training facility, “Tower Ridge Farm”, was located in the area, Dave and his wife, Debbie, frequently rode the Thornhill area trails for the fitness training of their young horses and for recreation with their fellow equestrians.

Dave emerged as a formidable leader in the stewardship for all trails of the Maple Ridge horse trail network, serving as HHA president for a time, and was a founding member of KEEPS (Kanaka Education and Environmental Partnership Society). His passion was particularly apparent in his home neighbourhood, where his efforts to maintain Tower Trail complemented his work on neighbouring Bear Ridge Trail to the south, another key route of the horse trail network that travelled along the southern lower slope of Thornhill Mountain. Dave’s tenure with the HHA lasted for over 30 years; in 2012, the Smiths retired and relocated to the BC interior.

In its role as a primary connector on the north side of the forested urban reserve on Thornhill Mountain, Tower Trail serves two important functions in the horse trail network. It provides equestrians with forested, off-road access on the north slope of Thornhill Mountain, via the 108 Avenue and 110 Avenue Road Allowances between 252 Street and 260 Street; secondly, it branches to a southward series of switchbacks that serve as a forested, off-road uphill connector to the mountain’s peak. This key set of switchbacks originally offered two forks to connect with 256 Street; the first exited at the peak of Thornhill Mountain into a forest clearing adjacent to the uppermost tower on 256 Street, while the second avoided the full-elevation climb by traversing a path around the slope to exit onto 256 Street at the lower tower site, about 200 m south of the peak. 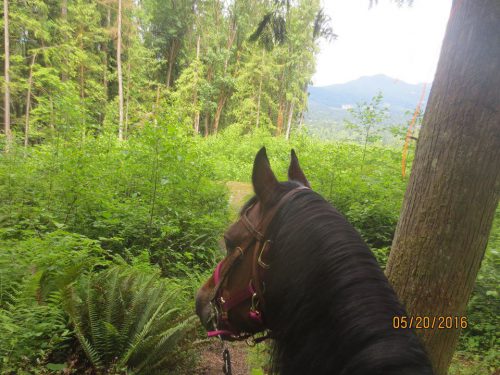 On Tower Trail heading to the west trailhead at 108 Ave

Prior to the construction of Tower Trail, equestrians could only scale the hill via the steep gravel service road of 256 Street, northward from 104 Avenue. The west-most trailhead at 108 Avenue and 252 Street is a very steep access/exit point for Tower Trail that is convenient for trail maintenance; with the recent nearby housing development, the natural horse trail here has been replaced by several short asphalt and gravel switchbacks to also function as a service road for the subdivision. 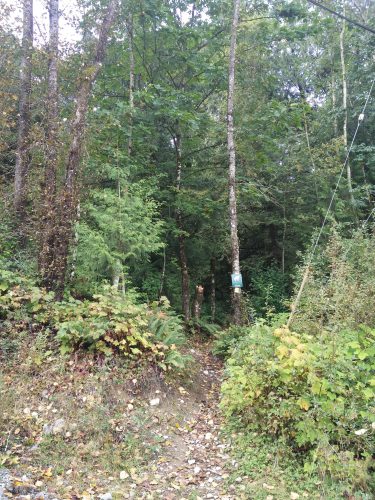 East trailhead for Tower Trail, off of 260 St/Grant Ave 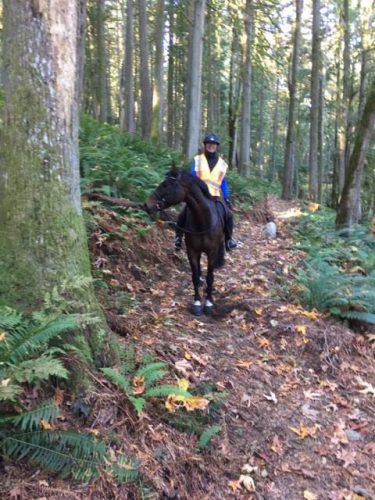 From the trailhead at 260 St/Grant Ave, this woodland trail begins rising immediately, twisting and turning as it climbs the mountain.

Many equestrians embrace the challenge to their skills and their horses’ abilities on this east end of the trail, tackling the natural steps formed by exposed tree roots and clusters of tumbled boulders but also enjoying the relief of the soft soil on the brief level sections in between the obstacles.

Here, a natural barrier remains on either side of the narrow trail from decades of fallen branches weaving together into a moss and lichen-covered tangle; a rest to take in the view of the deeper forest of western red cedar and big leaf maple reveals clumps of tall, lush sword ferns sprouting from every cleft.

As the trail wraps around the north slope of Thornhill mountain, it widens a little and the grade eases; from this point onward, the natural forest-floor of duff – that blend of fine woody debris, conifer needles and leaves – provides comfort under foot for horses and hikers alike, and maintains its stability year-round, thanks to the mountain’s gradual north-draining slope at that elevation.

Turning south, the switchbacks begin; in the approach to the peak, the forest canopy opens up slightly, and the greater light reaching the forest floor supports salal, mahonia, salmonberry and many horses’ favourite snack – huckleberry. 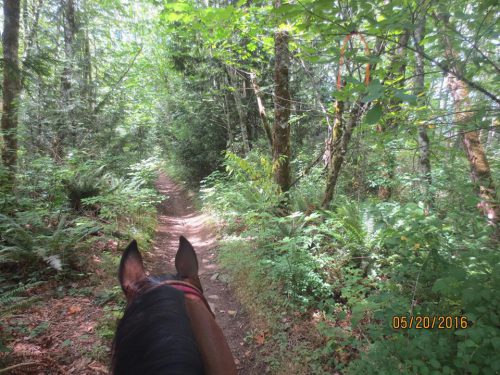 On Tower Trail, along one of the switchbacks 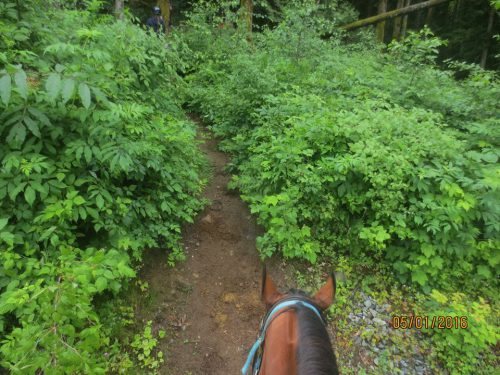 Snack-worthy bushes near the peak of Thornhill

The southeast-trending forks off of the switchbacks return equestrians and hikers down to the denser forest on the route to the two southern trailheads halfway along the mountain slope on 256 Street, while the climb to the peak continues to brighten, all the way to the open plateau at the top, which is ringed by a thicket of thimbleberry, flowering currant and blackberry in summer.

The final segment of Tower Trail at the peak is a short dip through the tall cedars to the west trailhead at the north end of 256 Street. 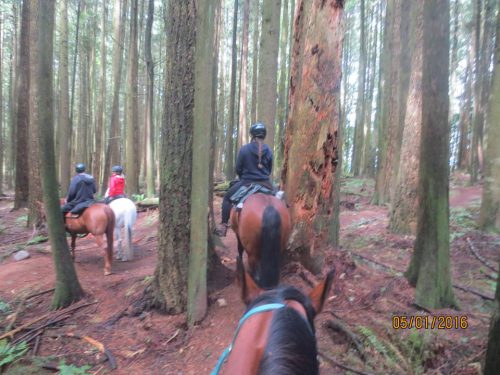 Forest at the peak of Thornhill